Meerkats are furry, squirrel-sized animals well known for their upright posture, eye markings, sunbathing habits and underground tunnel and chamber living quarters. They’re avid diggers, clawing away burrow systems of up to 250 metres from central point to outer perimeter with multiple entry and exit holes. Diurnal by nature, they snuggle down in their burrows at night and come out in the morning sun to bask, frolic and forage for food. 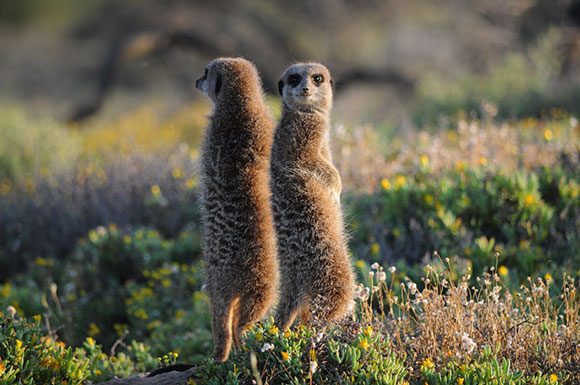 Each morning they emerge from their burrows to face the sun and stand on their hind legs with their tails forming a leg-tail tripod for balance. The dark sunglass rims around their eyes serve to absorb the sun’s glare. This helps them to survey the landscape and skyline for sharp eagle claws, slithering snakes and opportunistic jackals.

Their furry tummies act as solar panels to help warm them up in order to reactivate the necessary enzymes that aid their daily digestive process. If it rains, they don’t bother coming to the surface at all, opting to stay below ground where it’s snug and warm.

Punching above their weight

Sociable by nature, meerkats live in large groups with a dominant male-female pair. There is no gender discrimination. Sometimes several meerkat families may live together. Every member of the “gang” or “mob” contributes and participates in daily chores, which generally entail finding food, housekeeping and protecting the group.

In the wild meerkats weigh 600 to 800 grams. Yet, in spite of their tiny frame, they use their little clawed hand-like paws to burrow a whopping 1.8 kilograms of dirt per minute. This would explain their unusually large homesteads.

Depending on mood, meerkats exhibit approximately 14 different sounds including squeals, grunts, barks and growls accompanied by some ritual sparring, nipping, cuddling and jumping up and down. Regardless, of what is going on at any given time, they take turns to keep watch and notify the rest of the gang of any potential danger.

At the sound of a warning bark meerkats take refuge in their underground tunnels. If a predator is spotted too close for comfort, the sentry meerkat gives a warning call the gang leaps into action by prancing about, making noises and rushing at the foe. Predators are unused to being chased by their food and will usually turn and dart off in the opposite direction. Intruders that hang about are subjected to meerkat mob justice and killed on the spot. 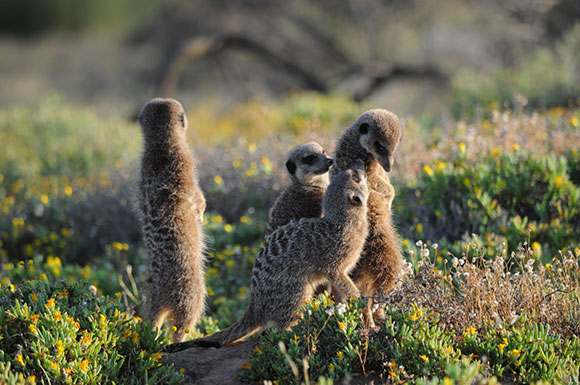 Until death us do part

Life expectancy in the wild ranges from eight to ten years with meerkats mating for life or until one of them dies. The dominant female is pregnant year round with gestation periods of approximately 75 days and litters of three to five pups. Babies stay underground for the first months of their lives. The survival rate is 40-45% and only those that survive ever see daylight.

When the male and female youngsters emerge they can seek comfort from any member of the family and beg for food for the first 5 months or so. Young males are enrolled in older sibling mentorship programmes. At 18 months to two years meerkats become mature adults and the newly mature males are encouraged – or booted out really – to leave and start their own families.

Sometimes they hover on the outskirts of the community and weedle their way back in for a short period of time before being shoved off to start their own meerkat brood. Occassionally, a lone male will hang about on the perimeter and have a screaming tantrum, which causes other meerkats to dash out to shut him up so that he cannot attract peckish unwelcome visitors.

Observing meerkats in the wild is utterly captivating. They exhibit intriguing behaviours from wrapping arms about one another, appearing to hug and cuddle, doing a kind of wiggle dance, hopping on top of one another to form a mini totem pole and bouts of sparring. When meerkats have a go at one another, they romp and nip, and the winner gets to urinate on the loser. This takes place at least twice a day with the smelliest of the mob occupying the lowest rung of the community ladder and those least urinated upon falling into the upper echelons of meerkat society. 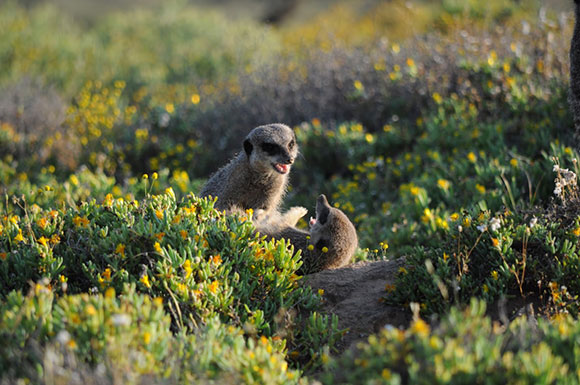 No courting in mom and dad’s house

Scent makes you family and once a young male reaches maturity his scent changes. Cast out, he hovers around the meerkat community within sight of some gorgeous unwed females, lures them out and plays hard to get by running and hiding. One of the young ladies will dart out after him to investigate. Once his scent is on her, she too is booted out of the family.

Meerkats are omnivorous. They live on a variety of fast food from small mammals and reptiles, birds, beetles and spiders to worms and crickets. They also eat eggs and vegetation. Meerkats are known to dig out and snatch up scorpions, biting off and chomping the venomous tail, to which they are immune. In fact, gobbling scorpions helps to build up resistance.

Where to spot a meerkat in the wild

Finding a meerkat is no easy feat. It takes some serious searching, patience and a keen eye. Meerkats live in Southern Africa in areas with low-lying vegetation or scrub and desert regions such as the Kalahari. The trick is to carefully survey the land surface looking for something that resembles a stick poking out from the ground. If the stick moves it is quite possibly a meerkat. Ultimately, the best way to have a meerkat adventure is to book a sunrise excursion with an experienced guide. Your guide goes in search of a meerkat family the day before so that on the day you park, enjoy a piping hot cup of tea or coffee, walk a little way and relax in a comfortable chair and enjoy an exceptional meerkat encounter. 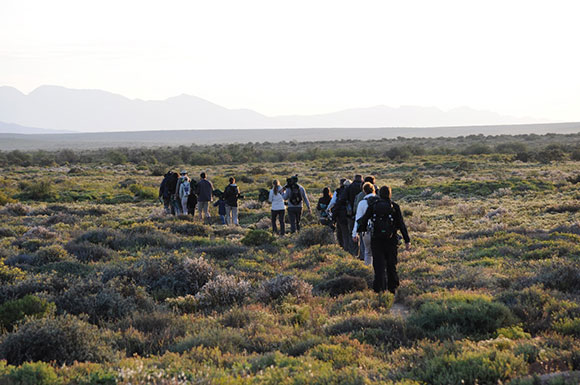 To book a meerkat adventure tour