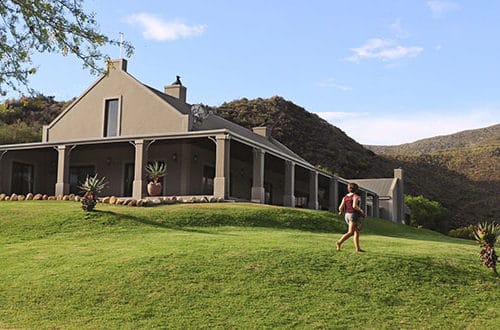 Wildehondekloof is situated only 60 km from Oudtshoorn. Oudtshoorn has long been a favourite holiday destination in the Western Cape South Africa with lots to see in this little town they call Oudtshoorn, the capital of the Little Karoo or mostly known as the Klein Karoo which is the Afrikaans name for this semi desert region. Oudtshoorn is home to a variety of activities that attracts guests from all over the world. 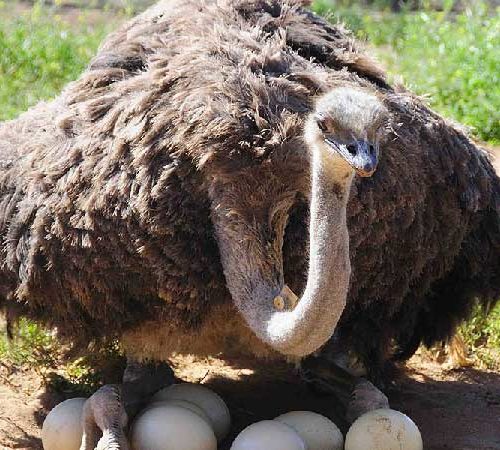 Oudtshoorn is the ostrich capital of the world. The world’s biggest bird is just one of the many attractions in this area of exceptional contrasts and natural beauty.
The region is home to the spectacular Cango Caves, Africa’s largest show cave system; an ecological hotspot where three distinct plant biomes (succulent karoo, cape thicket and fynbos) converge; and the Swartberg mountain range, which is part of the Cape Floral World Heritage Site.
Wildehondekloof is only a 40 min drive from Oudtshoorn and perfectly based to explore the scenic attractions of the Klein Karoo as well as the natural beauty of the nearby Garden Route.

You are not the number one priority, the meerkats are. We are on their turf.

Every evening before sunset, Devey, Dolf or Jaco from Meerkat Adventures go to the De Zeekoe Reserve to see where the meerkats are bedding down for the night. Meerkats are nomadic squatters, not known for their domestic skills so when their house is really dirty, they just move, usually to the burrows made by other creatures in the veld. As they are in the habit of urinating and defecating where they sleep, they usually move home every few days. This gives the vacated home a chance to air, beetles come and eat the faeces, the fleas and parasites die off, and the house essentially cleans itself.

We are each given a folding chair and a blanket and we start the 1 km walk to where the meerkat family bedded down last night. The walk is easy and warms us up a bit, then we get to the site and arrange our chairs about 10 meters away from what looks like a few small sandy areas in the fynbos.

Now we sit and wait.

The meerkats will not emerge from their warm, smelly burrow until the sun is shining. While we wait, looking miserably at the clouds blocking the sun, and getting colder and colder, our guide and meerkat lover Dolf tells us about these suricates, how they live and why there should be no human interaction with them. His stories and observations are educational, funny and very interesting.

After almost an hour of sitting shivering we are thrilled when a head pops up and a meerkat emerges. He stands, has a scratch, looks around and disappears back down into the burrow.

We are hoping he is going to wake up the rest of the family but apparently he has decided it is not sunny enough to warrant getting up, and has gone back to bed.

Eventually, about an hour later, one by one the family emerges. The sun has broken through the clouds, and we watch their antics with delight.

They scratch, they sniff one another and they stand up straight facing the sun. The darker patch of fur on their bellies acts as a solar panel and warms up their internal organs.  They do this until they feel energetic enough to head off into the veld to find food. This is important, and not to be confused with idle sunbathing.

One meerkat is on guard duty. He finds the highest point in the immediate area, stands up, his body is dead still but his head is moving continuously, watching for danger. He leans slightly backwards, the tail locks and bears most of his weight, his feet touching the ground only for balance.

We have the privilege of watching the meerkats for about an hour and a half. The younger ones play, running, rolling and chasing each other in between stopping to scratch furiously as meerkats are flea magnets. Sometimes they huddle together to present a larger united front against a potential threat, like a bird flying overhead, or they sit and groom each other until one gets bored and runs off to play.

The older ones look on, and find a good place to stand and soak up some sunbeams. They chatter and look around, not paying any attention to us at all.

Finally one by one they start to move, walking within a meter of where we are sitting. A few stop for a minute or two to stare at us, and then carry on. We watch as they disappear into the veld to find breakfast.

When the last one has disappeared from our sight, we pack up our chairs, roll up our blankets, and stretch our now frozen bodies to restore circulation before we start the walk back to our cars.

Meerkats live in family units, mom, dad and a couple of kids. They do not recognise one another by sight though, they rely on smell. Each family has its own unique scent, and to be accepted in the family territory, you have to smell right. Part of the morning ritual is urinating and rubbing on all the family members, marking them as OK.

Incest is frowned upon in meerkat land , so when the young meerkats reach the age of sexual maturity they are banished from the family and have to go off and find a wife and create their own meerkat colony.

Dolf tells us a story about a teenage female from this family. A male from a nearby colony was on the hunt for a wife.  He got the attention of the young girl and persuaded her to go off with him for the night.

Maybe he was not Mr Right for her, or perhaps she was just having a moment of teenage rebellion and had not wanted to leave her family yet, whatever her reasons, she returned home the following morning.

Unfortunately, when she joined in for the morning sniffing ritual, she did not have the correct smell. She now carried the scent of her boyfriend.  The family tried to chase her away, but being a stubborn girl she wanted to stay.

The meerkats perceived her as a threat to their colony and they killed her. Her head was found meters away from the rest of her body.

These meerkats have been habituated to seeing and hearing human beings.

Devey Glinister, the founder of Meerkat Adventures, started by going into the veld and sitting on a chair 100 meters away from the meerkats. He would talk, sing and shout and when he ran out of things to say he would read aloud from books. He gradually decreased the distance between him and the meerkats as they became accustomed to him and accepted that he would not interfere with them and posed no threat to their family.

He did this for a few hours every morning and every evening for over a year, before he brought the first group of visitors to see these comical creatures.

At no time has he touched, fed or interacted with the meerkats.

Meerkats that have been separated from their colony and interacted with humans can never be reintroduced to the wild. They would be killed by the first wild meerkats they encountered as they would not have the correct scent to be accepted into the group.

To book a meerkat adventure go to www.meerkatadventures.co.za

The guides are experts in these particular meerkats and can answer all your questions about the habits and rituals of this colony. They have never ending stories to tell as well as extensive knowledge of all the other small animals, birds and vegetation in this little piece of the Karoo.

They are totally committed to preserving both the meerkats and their natural environment.

Please think before you book any experience with wild animals.

I would love to walk with elephants, pat a cheetah, feed a lion cub and interact with any young animal, but I won’t.

In too many cases, where there is any human interaction involved, it means the animals have been trained, fed, confined and dominated. Many animals endure extreme cruelty as they fight against the unnatural behaviour they are being forced into. Wild animals should never, ever be trained.

None of this is fun for the animals.

Please also think about what happens to the cute baby elephant or lion cub when it is too big, or no longer cute enough to be cuddled. It has no skills to cope in the wild, so the chances are it is sold to the canned hunting industry, or used to breed the next batch of cuties to entertain humans.

It is unreasonable to expect the equivalent of a NatGeo experience that took months to film, in the half day you have allocated, and in my experience, wild animals are just not into selfies.

There is a far greater sense of achievement going into a reserve with a trained guide and the hope and anticipation of what you might see. Wild animals doing what comes naturally on their own turf is a very humbling experience. Often, when you have to work  to earn the privilege, the experience is so much richer.

If you would like to learn more about the sad and harsh reality behind animal interactions, search these tags on any social media platforms.  #BloodLions   #BredForTheBullet  or go to https://twitter.com/Blood_Lions

Please help us to end the demand for animal interactions by sharing, educating and spreading the word.